GreenEggs:  What is … Mill Ends Park?

YES!  On my cyber travels I happened upon one of the strangest things I’ve ever happened upon … in a gardening sense, that it.  The World’s Smallest Urban Park – can you believe it?  Mill Ends Park, a diminutive two-foot circle and only just big enough for one plant, sits in the middle of a median strip on what is now SW Naito Parkway, in Portland, Oregon.    It also happens to be home to the only leprechaun colony west of Ireland, although that point seems overlooked by the Guiness Book of Records.  Can’t imagine such a place?  Here’s a picture. 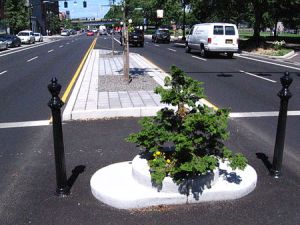 The story goes that in 1948 the site was prepared for a light pole to be installed on busy SW Front Avenue.  Time passed and the lightpole never arrived, yet weeds and nasties sprung up as they do when a plot of ground is left unattended.  Dick Fagan, a columnist with the Oregon Journal planted some flowers on the site, declared it a park and named it after his column in the paper, Mill Ends.  The park was officially dedicated on St Patrick’s Day, 1948, as “the only leprechaun colony west of Ireland”, according to Fagan.

Fagan told the story of the park’s origin: He looked out the window and spotted a leprechaun digging in the hole. He ran down and grabbed the leprechaun, which meant that he had earned a wish. Fagan said he wished for a park of his own; but since he had not specified the size of the park in his wish, the leprechaun gave him the hole.[4] Over the next two decades, Fagan often featured the park and its head leprechaun in his whimsical column. Fagan claimed to be the only person who could see the head leprechaun, Patrick O’Toole.[3]

Fagan published a threat by O’Toole about the 11 o’clock curfew set on all city parks. O’Toole dared the mayor to try to evict him and his followers from Mill Ends, and threatened a leprechaun curse on him should he attempt to do so. Subsequently, no legal action was taken, and the leprechauns were allowed to stay in the park after hours.[5]

The small circle has featured many unusual items through the decades, including a swimming pool for butterflies—complete with diving board, a horseshoe, a fragment of the Journal building, and a miniature Ferris wheel which was delivered by a full size crane. On St. Patrick’s Day, 2001, the park was visited by a tiny leprechaun leaning against his pot of gold and children’s drawings of four-leaf clovers and leprechauns.[2] The park continues to be the site of St. Patrick’s Day festivities. The events held here include concerts by Clan Macleay Pipe Band, picnics, and rose plantings by the Junior Rose Festival Court.[3]

Mill Ends Park in 2004 before remodeling.

I love the absurdity, I love the leprechauns and I love the teeny tiny park!  But it is not all roses and hollyhocks though.  There is a contender for the title of World’s Smallest Urban Park and they are not going down without a fight!  Prince’s Park in the Staffordshire town of Burntwood, UK is challenging Mill Ends Park in the teeny tiny park stakes, claiming that Mill Ends isn’t really even a park to start with!  Prince’s Park is a full 15’x30′ in size and boasts home to the first and only World’s Shortest Fun Run, a full 55 strides around. 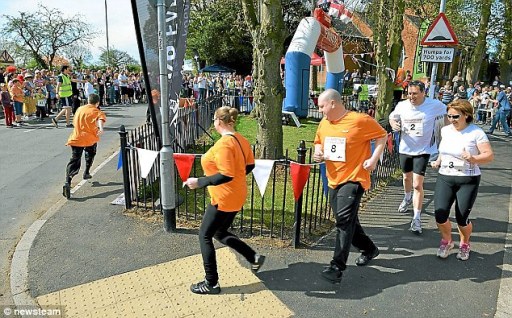 Not far to go now!

In 2003, nearly 400 people showed up to race around Prince’s Park completing the race in just 7 seconds flat!  Awesome!

So, which do you think has the best ‘small park spirit’?  Are you Team Portland or Team UK?  I can’t get past the cute factor of Mill Ends Park but the World’s Shortest Fun Run at Prince’s Park is a really fabulous community event.  I’m torn but leaning towards Team UK.  You?

2 thoughts on “Do you play Jeopardy?” 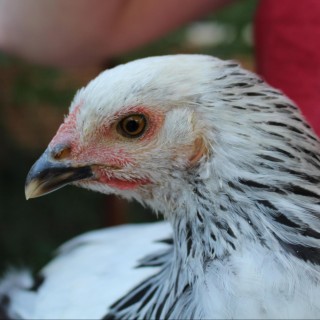